Remember, turn off your computer before midnight!

Can you imagine the Y2K scare in a world dominated by the 24 hour news cycle, social media and instant information access?

Before the turn of the next millennium panic had set in around the globe as people feared computer programs would malfunction posing potentially catastrophic consequences for society. This was known as the Y2K bug and people were worried because computer programs in the 1990’s had been developed to preserve storage by using code leaving out the first two digits of the year, for example the date 1 January 1980 was written as 01/01/80. The concern was that programs would be unable to interpret the change into the new millennium i.e. the year 2000 would be written as 01/01/00 and people were unsure if this would be interpreted as 2000 or the year 1900.

Inevitably Governments devoted significant resources to understand the threat and the Australian Government provided funding to key infrastructure including hospitals, roads and schools to combat the problem.  Companies also developed contingency plans to deal with the crisis before and after the clock struck midnight.  Some plans included delaying all e-commerce plans (online business) which was at the time in its infancy and planning to shut down factories that used legacy programs that were deemed unable to cope with the change to 2000.  Bankers were worried that interest rate calculations would be wrong causing chaos with peoples mortgages, pilots were concerned that planes would fall out of the sky (airports and flights were abandoned on a mass scale on New Year’s Eve 1999), traffic lights would malfunction potentially causing accidents and people were worried that necessities such as electricity and water supplies would be cut off.

During the increasing panic and skyrocketing spending, people had begun hoarding food and critical supplies and were bunkering down at a time when the bug seemed inevitable to occur.  Australian companies had budgeted for urgent updates of their internal systems with Telstra investing the most at AUD $500M.  Other ASX listed companies also invested significantly to reduce their exposure to the bug.

The media was having a field day with reports being circulated that the world as we knew it was ending or at least dramatically changing.  A cover of Time Magazine in 1999, World weekly news in 1999 and constant news reports from a purpose-built Y2K conversion centre in Tokyo, Japan all culminated in driving hysteria globally.  The media machine was also recommending people to stay at home for new years and some were advising people to turn their computers off (Best Buy Advertisement 31 December 1999). 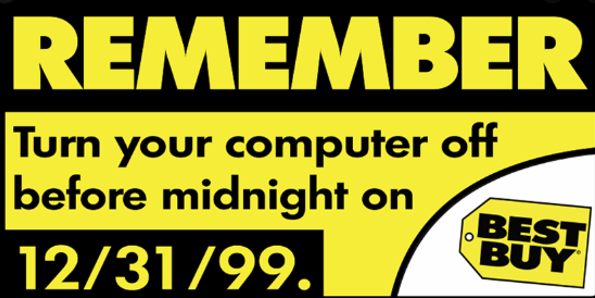 When the clock stroked midnight there was no catastrophe, no significant malfunctions and a collective sigh of relief was felt around the globe.

It is a topic of debate on whether the significant spending of Governments and industry estimated at $12 billion in Australia was justified.  Some sceptics note that the majority of systems were already capable of dealing with the change to the new millennium.  Others have argued that without urgent spending systems would have failed on a much greater scale.

Some may group the Y2K bug with other looming catastrophes that didn’t eventuate including global warming wiping out the planet by the year 2000 and the expected energy crisis where consumption of oil would eventually outweigh production.  Others may view it as successful implementation of fiscal policy to deal with an impending threat.

Whatever one’s view is what is certain is the majority of society did not rely on functioning technology for their occupation and personal lives to the extent we do today through our social media, Netflix streaming and 24 hour globalised world.

Do we face a similar scare in 2038?  The cause of the problem is the latest time that can be stored beyond 1 January 1970 being when computer programs were being first developed is 3:14pm on 19 January 2038.  Programmers are uncertain if systems will be able to interpret time beyond this. To date there has been no universal solution to deal with the issue.  With such complex algorithms being integrated into computer programs today is it beyond our abilities to unwind our systems to deal with this impending threat?  We wait and see.